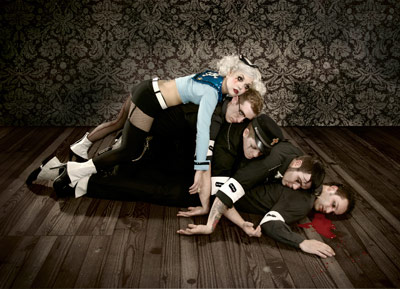 Performing a dark, lean blend of blues and country sounds fortified with a punk attitude, Miss Derringer is an L.A.-based rock band let by a pair of musicians-turned-artists, Liz McGrath (a painter and sculptor who previously sang with the band Tongue and edited the 'zine Censor This) and Morgan Slade (a photographer who plays guitar and writes much of the group's material). Rounding out the group are guitarist Mark Miller (formerly of Los Cincos), bassist Sylvain de Muizon, Julio Bell (ex-Bobsled and Bulimia Banquet) on autoharp, and drummer Mark Miller (from Skeetertruck).

The group released their first album, King James, Crown Royal and a Colt 45, in February 2004; appropriately, the record-release party was held at the Copro Nason Gallery in Culver City, CA, in conjunction with a show of McGrath's artwork. The band underwent some lineup changes for 2006's Lullabies, which includes guest musicians such as drummer Clem Burke from Blondie and was co-produced by Derek O'Brien of Social Distortion and The Adolescents. Lullabies also featured the core duo of McGrath and Slade and bassist Sylvain de Muizon, as well as Blondie drummer Clem Burke and Charley Horse member/Acetate Records owner Rick Ballard on guitar.

In 2007, Miss Derringer released the 2 song ep "Black Tears" electronically, on Stay Gold Records. Black Tears was produced by John Kastner of the Doughboys and All Systems Go! The song "Black Tears" and its remix version have been featured on the television show How I Met Your Mother

In 2008 the band signed a "strategic partnership" marketing deal with noted Advertising Agency Deutsch Inc. In late 2008 Miss Derringer was selected by Morgans Hotel Group as one several bands to participate in their "Recess is on" campaign, and was filmed performing a live version of their song "better Run Away From Me" at the Mondrian Hotel in Los Angeles.

In February of 2009 Miss Derringer signed a record deal with Los Angeles label Triple X Records, who will release the band's third album "Winter Hill" in July of 2009.